Day of the Week: A rainy Wednesday in January

As most “Alli days” start, I slept in, turned off my phone, made a gourmet breakfast, danced in the bathroom as I got ready and wrote in my journal before leaving for the day. I decided it was high time I explored North Vancouver. Accessible by bus, train and then sea bus I knew I had no excuses keeping me from going. Taking the sea bus was an adventure in itself. I had never been on a bus on the water! I felt like a kid, and was among kids who all starred down at their devices playing games and texting emojis, so it was a tad ironic but nonetheless it was a beautiful way to cross the ocean to North Vancouver. It was a rainy day but I was dressed for the occasion. I grabbed a pamphlet, as a tourist in your own city would do from the sea bus terminal and I picked all the spots closest to me that I wanted to check out.

I started with the Lonsdale Quay and explored the market, had a chocolate shaped like a hedgehog and then felt guilty for eating something so cute, climbed the look out tower, and visited several vendors inside the market.

My next stop was a “beautiful, outdoor, garden”. I wish so badly I could say it was beautiful but it WAS January and a rainy day so I’m sure it’s much nicer in the summer months, but it wasn’t much to write home about. None the less, I walked on each path way and sipped my cup of tea from one of the neighboring plaza shops which, if I had to rate, was better than the garden walk.

Next, I took off to visit the Maplewood Farm. On a nice, sunny, summer day I can assume this place is jam PACKED with kids and parents and all the people I don’t want to spend a day at the farm with, but because it was raining I had every goat, chicken, piglet, rabbit, gerbil, sheep, pony and donkey all to myself. I was in heaven. I went right into the goat pen and just hung out with goats for 30 minutes. (I’m not sure if I was allowed to do this but nobody stopped me so I stayed with the goats). I talked to, sang to and visited every pet on that farm. No one was around. It was amazing. This isn’t everyone’s version of heaven but for me I had died and gone to straight to the pearly gates. 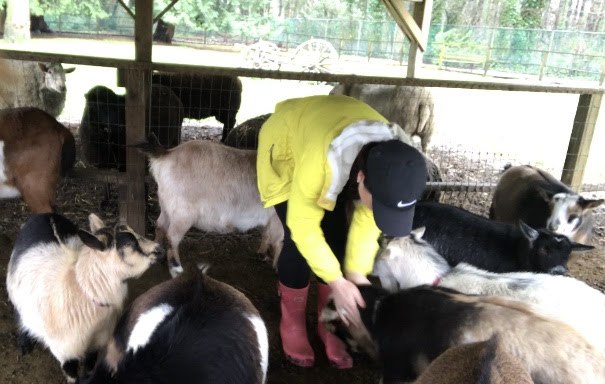 Once I left the farm I had a drink and appy at Tap and Barrel at the Shipyards and yes, I have no phone so I’m forced to make conversation with people, to read the paper, to look up, look around me and be comfortable being alone. I think this was the hardest struggle to overcome in the beginning but is now something I have grown to love. Being “offline” even for a day, opens your eyes and heart up to so much you don’t make note of on a regular day. I’m engaged more with employees at business’ I visit, or people sitting next to me in public, to dogs, to children, to people.

After dinner I came back to Vancouver and walked to the beach, another perk to a rainy day, you have the entire beach to yourself! I ended the day with a hot shower before turning on my phone and responding to my online life. Another “Alli Day” in the books, another day exploring my own backyard and another day getting to know myself better.

Info on the places I visited are listed below: